Of all the lost houses, Littlemoor has seemed the most illusive. It was these two photos that captured my imagination:

Littlemoor, or Littlemore Castle as it became known locally, stood in Queensbury for only 45 years. It was built in 1891 for Herbert Anderton Foster, the grandson of John Foster, founder of Queensbury’s famous Black Dyke Mills.

My Dad came up from Wiltshire and together we made an appointment at the West Yorkshire Archive Service in Bradford, having booked out everything we could find with the word ‘Littlemoor’ in the reference. This was what greeted us!

It took us two full days to go though. Some of these rolls have over 20 separate papers in them. Some of the papers were so fragile that they cracked as we unwrapped them. They seemed to be drawn on baking parchment.

Everything had been kept: from bills, quotes and designs for coving (you’ve never seen so many variations for coving!), to drawings of furniture and fireplaces.

There were endless ground plans, revised and revised again.

There were details for the tilework for the basement swimming pool. Drawings for the huge organ that stood in the Billianrd room. Elements for details of the exterior, like the towers,

the windows and the orangery.

Many huge pieces of paper like this (It’s filling a whole double table in the library) which were full size plans of wood or plaster work for the workmen to follow.

Though we made made many exciting discoveries (these drawings of the interior were among my favourite finds),

there were no full elevations. No sign of the drawings that the architects would have presented to H A Foster to show how the Castle would have looked. We concluded that these must have been kept by the Foster family – perhaps they have their own family archive.

As there were no drawings of the house in full I decided to dig out my Grandad’s draftsman’s tools and try to piece the elements together. 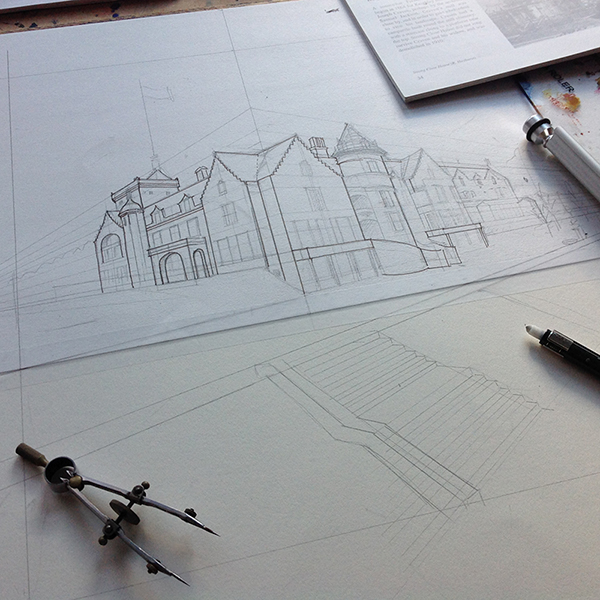 HA Foster was 37 when he commissioned the building of Littlemoor Castle. He settled later in life, having spent many years travelling the world on his yacht. The family were incredibly wealthy. The success of the Mills enabled them to live like kings. 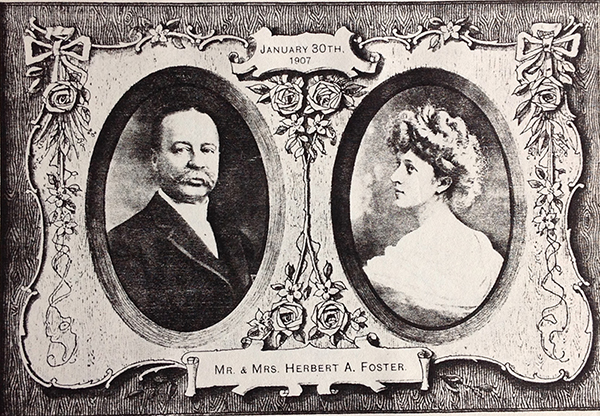 Extract from the Halifax Courier dated 1891:

Mr Herbert Foster’s New House – Mr Herbert A Foster (at present on a Yachting tour), is having erected at Queensbury a very handsome mansion. The building is rich in massive stone work, and much resembles a castle, a fine tower rising well above the rest of the pile. The principal rooms are of noble proportions, and in one portion of the basement, a swimming bath is being formed all lined with white glazed bricks. The mansion will be fitted with electric light and the extensive grounds will be landscaped.

The architecture a combination of baronial, and high victorian gothic.As well as the basement pool it had a huge organ in the billiard room, a banana tree in a long orangery and a lift. It drew gas and electricity from the mill nearby, enabling it to have all the mod cons that the age had to offer.

He married in 1907, Frances Edith Agnes Brudenell-Bruce (the daughter of Lord Robert Thomas Brudenell-Bruce) ….. She came with a title and a considerable fortune of her own. Littlemoor, in all it’s grandeur, was one of a number of properties that they owned.

Edward Elgar visited the house in 1928, and heard the Balck Dyke Mills Brass Band play in the terraced gardens. In the archive we found drawing plan of a stage: It predates Elgar’s visit by some years, but gives a lovely idea of what it might have been like…

Blackdyke Mill Band played on the lawn in front of the dinning room. Elgar was there one night and my father asked him to conduct the band in ‘Hope & Glory’, but he said he wanted to enjoy their playing instead.

Unlike many of the houses I have looked at, Littlemoor didn’t play an active part in the war in terms of billeting troops, or as a hospital. H A Foster, by then an honorary colonel of the Royal Field Artilary, laid on entertainment for the troops in the gardens. There photos are from around 1915:

On the left is ‘Tip the Bucket’, on the right is the prizegiving. You can see the fosters standing at the base of the round tower of the castle. These photos came from the Bradford Telegraph an Argus.

HA Foster died in 1930 in Perthshire, in one of the other family homes. At that time he no longer needed to live so close to the Mill where he had been a director.

Because I wanted to put the castle in context, I contacted the Queensbury Historical Society. Sheila and Hazel, two local ladies who have tried to piece together the history of Littlemoor Park, were kind enough to show me where the house once stood. These stone gates and the lodge (which bears the Foster coat of arms) mark the entrance. Then a long, tree lined drive sweeps round

The Fosters left the house and officially gifted the house to the inhabitatnts of Queensbury in 1936, to be turned into a park “to be associated with the silver jubilee of his late majesty King George the Fifth and in memory of the said Herbert Anderton Foster”

Soon after, in 1937, the house was stripped of all its lavish interiors. A piece in the Bradford Telegraph and Argus (October 12th 1937), with the headline “farewell to Queensbury Castle”:

They stood with catalogues open, pencils avidly poised in the baronial hall where once Lord Roberts and Sir Edward Elgar walked.

They came to buy the castle’s fixtures and fittings at an auction sale. They came from every part of the country.

With them were old grey men and shawled women – some of the former castle work people Queensbury housewives, one with a perambulator, came to see the old mansion for one last time.

They listened to the staccato business chatter of the sale. Then they went upstairs, some of them, to look at the great staircase, the grand fire place and the oak panels..

One or two bought little trinkets in memory.

Ezra Bateman was there.. He knows the castle well, for he did work in it at various times. “it was all done up with the best of everything” he said “the best materials. Now they are selling it. It’s a pity.”

There was a young man with a pipe whose father spent months in the work of building Littlemoor. There were pensioned employees of Black Dyke Mills, come to see at first hand the home of their former employer.

But business men dominated the crown for there were more than 400 lots to be sold and plenty of valuable work in it.

Grates, hand carved, finely wrought in iron and canopied, aroused interest and competition.. One was sold for 15s and another, with brass dogs, for more than £3…

Best of the early prices were for conservatory material which fetched about £18. Scrap dealers, generally, were interested in lead, brass and old iron. Antiquaries wanted curiosities in metal, building contractors those fittings which might be used for new “semis”

Mahogany seats, upholstered in Utrecht velvet, the stone staircase, oak panels, copper baths and lifts were among the items to be offered later in the day.

Littlemoor Castle, given to Queensbury some time ago, is to be extensively altered in the next 18 months. The big grounds will become a park and what is left of the castle after after some demolition work, may be a bandstand.

Demolition soon followed. The footprint of the house remained, with some pretty stone terraces and steps down to the terraced lawns.

It was a nice flat surface on which to play, and was regularly used for racing model cars: the little motors could be heard across the village. Below the bottom terrace was a small ornamental lake. Local children used to skate on it when it was frozen. One of the ladies who showed me around Littlemoor park remembers being pulled along by older children, all of whom had their own skates. A local man remembers fishing for sticklebacks there in the summer.

However, beneath the stone floor a network of rooms, including the swimming pool, could still be reached by curious children. They were too tempting, and in 1993, after a young boy was injured playing in the basement, the decision was taken to demolish what was left. This photo shows the demolition of tiled swimming pool beneath the flat stone floor (pictured left):

Unfortunately the terraces and the base of the round tower went too, and all that remains of Littlemoor Castle are these stone steps. 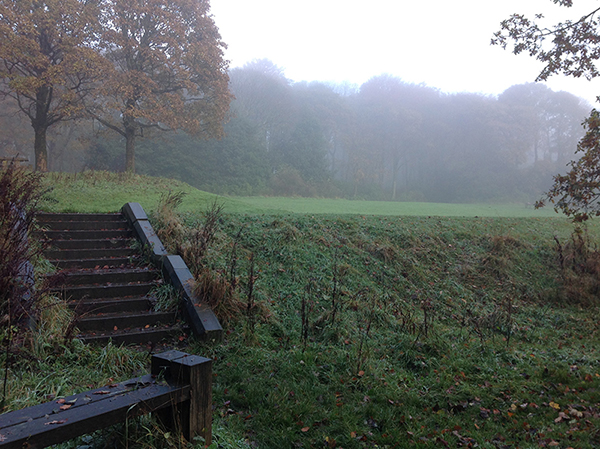 There was more detective work involved with this house than any other. Here is my final painting of Littlemoor Castle: 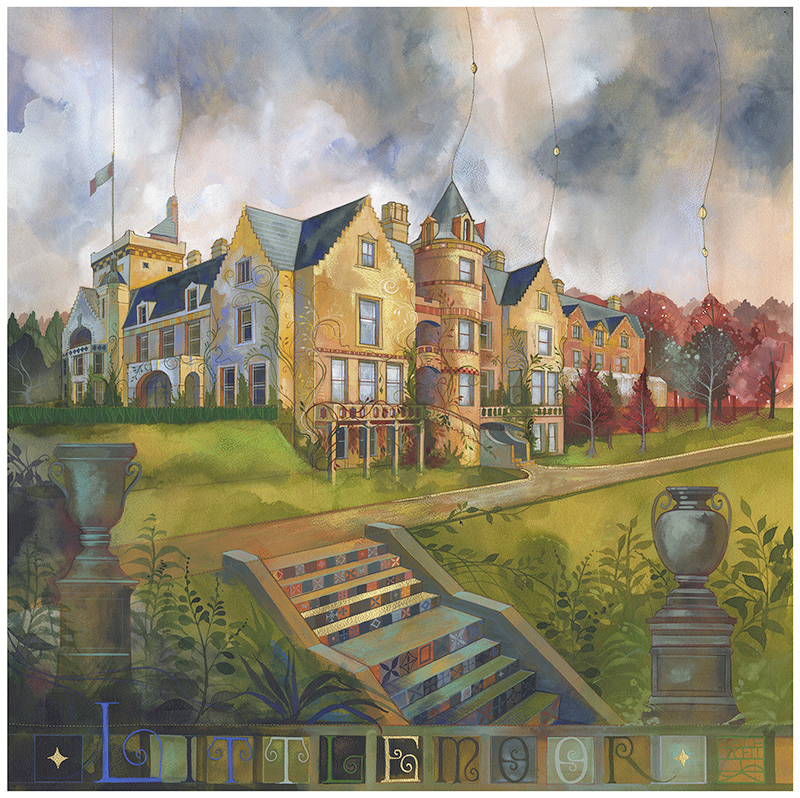 I’ve had a lot of help compiling this information and would like to say a big thank you to Sheila and Hazel. Many of these photographs came from them. Also to the WYAS.

And my lovely Dad.