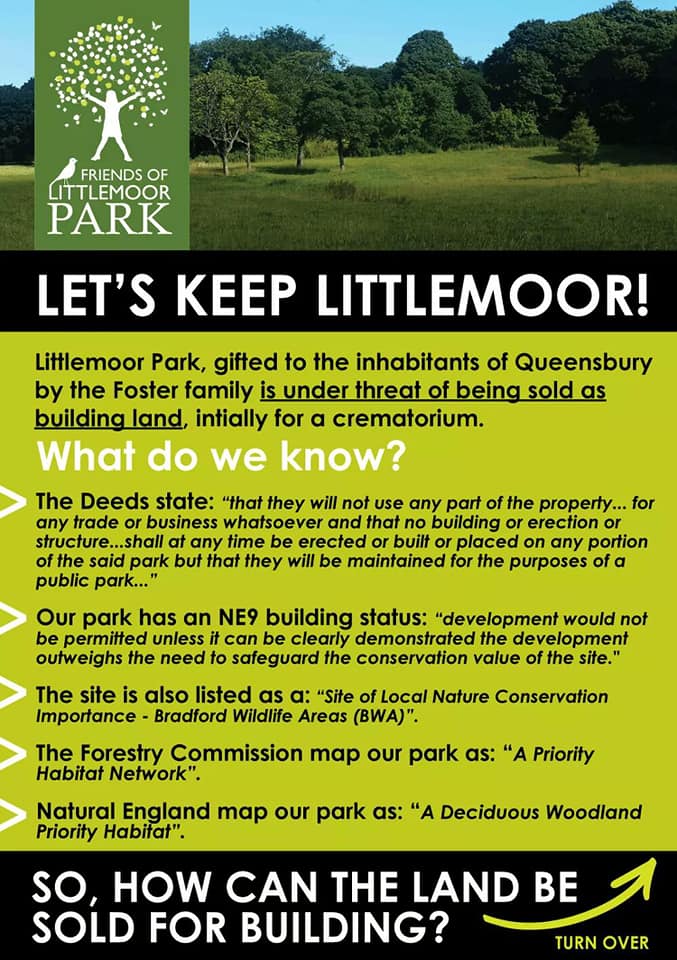 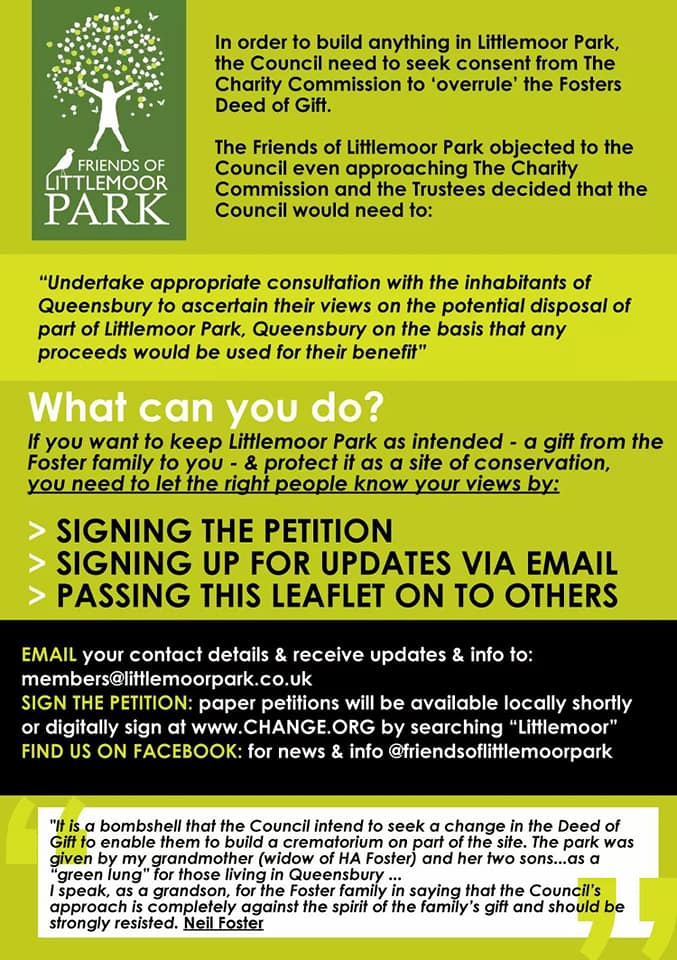 **The park is safe! – for now… More work is needed to ensure that this situation does not happen again. As a group. our focus has always been to ‘Uncover, Restore and Protect’. This focus will remain in place and we will endeavour to protect this beautiful oasis for generations to come. A huge thank you to all who supported the campaign to keep Littlemoor.**

Most people in Queensbury are rightly outraged that Bradford Council are considering Littlemoor Park as a site to build a new Crematorium. Littlemoor and one other Private site has been shortlisted. Littlemoor, as a site of Conservation Value, A Bradford Wildlife Area, A Priority Habitat and Network and gifted in perpetuity to the people of Queensbury should not be considered as building land. Here’s the story in a nutshell:

In order to build on Littlemoor, the Council have to ask the Trustees (Cllr’s of the planning committee) to ask for permission to approach the Charity Commission for a ‘Scheme’.

The Charity Commission can either accept that part of the land can be sold or it can deny the request.

The Council are forced to approach the Charity Commission as Littlemoor was gifted to the people and held in Trust as a “Green Lung” for all time.

The Friends of Littlemoor Park objected to an approach to the Charity Commission and the Trust agreed asking the Council to perform a public consultation before moving forward.

At present (October 2018), the Council are conducting a feasibility study before reporting this in January. IF Littlemoor is still a feasible site, then a public consultation will take place. The Friends of Littlemoor Park will insist on this following the guidelines set out by the Charity commission. They State:

“It is for the trustees to decide what form the consultation should take and this will vary depending on the changes being proposed. As there is no legal requirement to carry out a consultation exercise, we do not prescribe any particular format for the consultation. However, by way of illustration, where the changes are relatively minor, for example an uncontroversial change of name or a straightforward extension of the beneficiary class of an almshouse, the trustees would need to carry out a very basic level of consultation. Where the proposed changes are more significant, for example the change of use of a charity’s property, we would expect the consultation to be more vigorous including some (or all) of the following:

If any responses to the trustees’ consultation are sent to us we should forward these to the charity’s trustees. We will only deal directly with representations where these are sent to us following our giving public notice.”

By the end of January, IF the Council have submitted their feasibility study as expected and do what the people of Queensbury expect, we will be hopefully have some good news to relay!

We use cookies to ensure that we give you the best experience on our website. If you continue to use this site we will assume that you are happy with it.OkNoPrivacy policy
Revoke cookies